It’s Friday! Which — in a lot of ways — is now kind of like Sunday, Tuesday and all the other days. But, still, there are more Zoom happy hours on Friday, and I like that!

Speaking of things I like, here are five for today!

I was working on an article yesterday about all the breweries in the city that are offering take-out service. (There are 12!) While I was researching their new hours and logistics for pick-up, I took a look at the beers they have in stock.

There are some really good ones. I’m embracing a sweet tooth at the moment, which is evident in my choices during today’s curbside brewery crawl shopping spree. 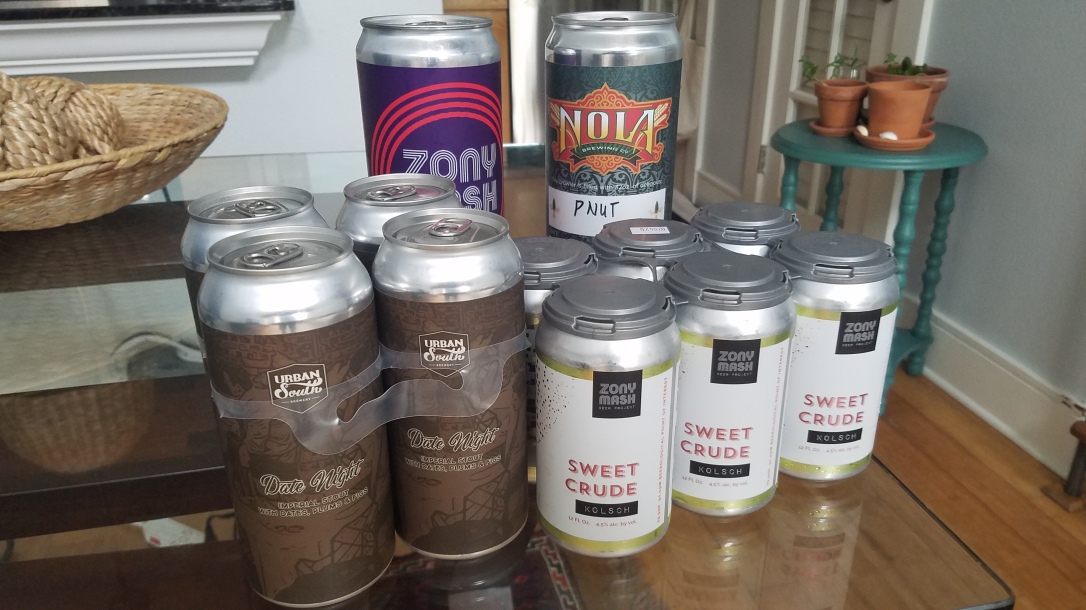 Originally I was just meaning to go to Zony Mash for beer, because they had a pizza pop-up I had been seeing all over Instagram.

The pop-up is Yin Yang Pie and I’m pretty sure they just got started a week or two ago. They’ve been serving at Zony Mash (once last week, twice this week) and they’re active on Instagram. Keep an eye on when they’re serving next.

We got the Oyster Pie (part chargrilled oyster, part pizza) and the Hot Coppa pie. I thought I was going to love the oyster pie most (it was really good), but the coppa was king!

(Bonus: I learned today that coppa is salami. I also learned that salami is from a pig. What?! I thought I was eating beef all these years. Now I wonder where liverwurst is from.)

I’m reading the book, “Sapiens,” by Yuval Noah Harari. It tells the history of our species of humanity, and it feels like every sentence gives me something to think about.

I’m sure I’ll talk about it in here from time to time. But this is one excerpt I thought was so beautiful and hopeful. It considers how we know so little about the things that took place in the tens of thousands of years Homo Sapiens existed before recorded history. But Harari pushes us to drop the comfortable notion that just because we don’t know what took place in those many millennia does not mean little of value happened.

This curtain of silence shrouds tens of thousands of years of history. These long millennia may well have witnessed wars and revolutions, ecstatic religious movements, profound philosophical theories, incomparable artistic masterpieces. The foragers may have had their all-conquering Napoleons, who ruled empires half the size of Luxembourg; gifted Beethovens who lacked symphony orchestras but brought people to tears with the sound of their bamboo flutes; and charismatic prophets who revealed the words of a local oak tree rather than those of a universal creator god. But these are all mere guesses. The curtain of silence is so thick that we cannot even be sure such things occurred — let alone describe them in detail.

Scholars tend to ask only those questions that they can reasonably expect to answer. Without the discovery of as yet unavailable research tools, we will probably never know what the ancient foragers believed or what political dramas they experienced. Yet it is vital to ask questions for which no answers are available, otherwise we might be tempted to dismiss 60,000 of 70,000 years of human history with the excuse that ‘the people who lived back then did nothing of importance.’

The truth is that they did a lot of important things. In particular, they shaped the world around us to a much larger degree than most people realize. Trekkers visiting the Siberian tundra, the deserts of central Australia and the Amazonian rainforest believe they have entered pristine landscapes, virtually untouched by human hands. But that’s an illusion. The foragers were there before us and they brought about dramatic changes even in the densest jungles and the most desolate wildernesses. The wandering bands of storytelling Sapiens were the most important and most destructive force the animal kingdom had ever produced.

I saw Portrait of a Lady on Fire in February and I still think about it often. Marianne is a painter, commissioned to do the wedding portrait of a woman who doesn’t want her portrait painted. Marianne has to be sneaky, and she is.

It’s a beautiful, sexy movie about love, friendship, and how unfairly society treated / treats women. The movie is fulfilling to watch, fulfilling to listen to, and fulfilling to think through.

It’s available on Hulu with your subscription, as well as on YouTube or Google Play for $6.99.

I can talk about this movie all day. Let me know if you see it, please!

I really like the band, Guster. I first heard them when two friends and I went to New York City for the first time without our parents. (Oh shit!) They were the musical guests on Late Night with David Letterman.

Guster was also the soundtrack for a lot of my road trips in college.

And I’ve seen them three times in New Orleans. They were last here about a year ago, and I’ll never forget how the House of Blues erupted in solidarity when they got to their anthem, “Happier”’s big lyrics, “One more inch, you son of a bitch! You’ve been a waste of my time, alllwayyyyyssss!”

Ryan Miller has been doing some live virtual shows on Facebook, and I’ll stop whatever I’m doing to tune in. If you’re a Guster fan — or at least Guster-curious — check it out!