Another beautiful day, though the first time I made it outside was 10:30 p.m. when Mariana and I scoured the neighborhood for her Thai food. Uber said the delivery was made, but there was no Thai food on her doorstep.

Still, lots of things to like about today. Here are five!

London’s National Theatre is showing one world-class production for free each week on their YouTube channel. Last week was Jane Eyre and it was great. This week is Treasure Island and it was even greater. New shows start on Thursdays, so you still have six days to catch it.

I love plays, but am often left imagining how a movie would present the story in a more effective way. Tonight, while I was watching Treasure Island, I don’t think a movie could have done it better. There was one scene in particular, when Long John Silver is teaching a young Jim about using stars to navigate, and I could have watched that scene for hours. It was understated, but beautiful.

The set also was so imaginative — especially when it opened up into a cross-section that exposed the action inside a ship. It all reminded me how live theater at its best can hold its own against big budget film.

In junior high school I had a year in which I was obsessed with Warcraft II. It’s happening again.

I’m not a gamer, but I’ve got a standing Warcraft II night with some buddies and I’m surprised how much I look forward to it. It’s a simple enough video game to get the hang of, but also with enough room to grow that you can sense improvement.

It’s a piece of cake to play against friends online, so let me know if you want to join in. (Ideally you’d be worse than me as I’m already getting rocked by just about everyone else I play with.)

Can I say Hard Target’s a great movie? No, I can’t say that.

I can, however, say it’s insane there was a time — not that long ago — that Hollywood was making these movies for us.

Jean-Claude Van Damme sustained a successful career off wild one-liners and roundhouse kicks. This movie has both. He plays a Cajun sailor named Chance Boudreaux (Chance Boudreaux!) and makes what appears to be zero effort at a Cajun accent. (Belgian…Cajun…same difference!) He also punches a snake.

I found it while researching for a list of some of the best movies ever set in New Orleans (again — using the word “best” in a flexible way), and this is a 90 minutes you won’t soon forget. You can rent it for $3.99 on Amazon.com.

I think this is the first meme I’ve ever truly loved. (Is it a meme? I think so. I don’t know. Anyway, I love it.)

The basic premise is…watch this video, this person’s in real trouble and then….

I know the Ghanaian pallbearers are coming, but…damn, they get me every time.

Mariana was ready to give up on the Thai food. She even made pasta. Uber refunded her. Problem resolved, right?

Nah. There was a free bag of SukhoThai sitting somewhere in the neighborhood and I wanted to find it. We walked about four blocks in total (I was prepared to walk more if need be), and there it was — about a block away from her apartment. 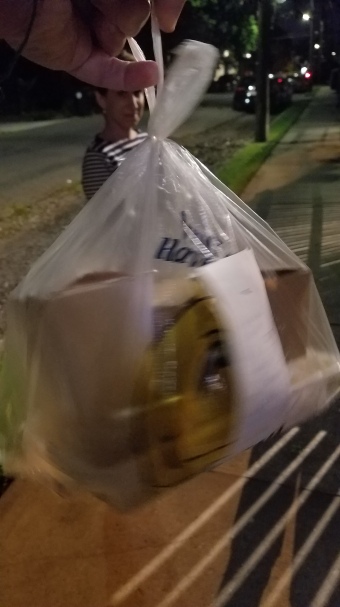