(As I wrote THAT sentence, Thomas Nido, our backup catcher, also hit a home run. So clearly, I just need to keep writing.)

In addition to watching baseball, I’m also pitching (ha) and getting some pretty fun writing assignments. One of the publications I write for, for example — Very Local New Orleans — seems to be moving in the direction of more frequently categorizing their articles into series.

I just turned in my first article for a series they want me to do on all the breweries in the New Orleans area. That’s exciting because that’s a ton of breweries, which means it’s a lot of work. But it’s also exciting because — as Associate Justice of the Supreme Court, Brett Kavanaugh curiously yelled repeatedly at a committee of the United States Senate — “I like beer!”

But the other series I’ve already been contributing to is called, “Know Your NOLA.” Basically, I choose a location in the city and dig into its history.

For that series, I’ve written about everything from ice cream shops to fire hydrants, and little-known islands to better-known sculptures. The most recent piece I wrote for Know Your NOLA was about a 100+ year old carousel in City Park — the last of its kind in Louisiana and one of only 100 in all of America.

What makes these so fun for me is I get to really do some research. I bust out and dust off my library card, read through 19th century newspaper articles and head to the archives on the upper floors of the main branch of New Orleans’ public library.

But, when I get an assignment, I usually start with a Google search. What’s been written recently about this topic?

For the carousel, there were actually a couple of news blurbs about it in the last couple of years, mostly because NOLA just celebrated the 300th anniversary of its founding as a European city, which resulted in a lot “300 Cool Things in 300 Years of NOLA” and other things like that.

But here’s the thing: a lot of those articles had incorrect information in them. For example, they all said the current carousel ended up in its current location by 1928. Not true. It wasn’t until 1948.

Except…I care and we all should.

In 1928, it was a different carousel that was placed where the current one now resides. A decade later, that different carousel was moved to a separate amusement park (Pontchartrain Beach), leaving Carousel Gardens without a carousel.

So where is it? 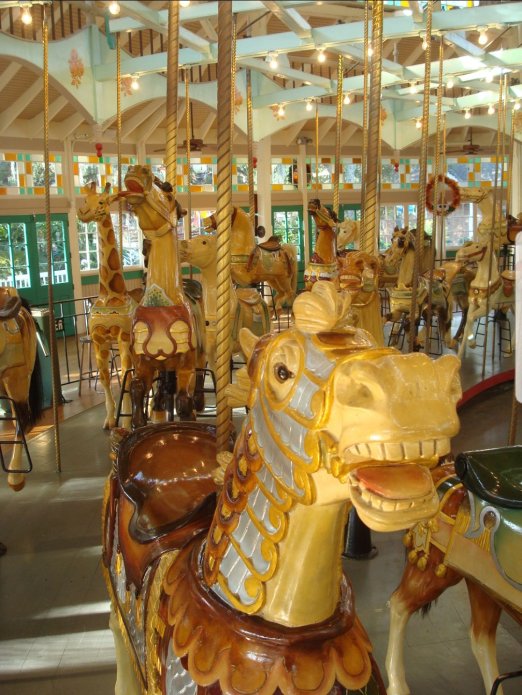 I have no idea. But I want to find it. If you know of anyone who you think might know someone who might know something about this, please let me know! I think this is the kind of topic that would be cool to pitch to history-oriented magazines.

These carousels are amazing, and the people (locally and otherwise) involved in them are interesting and important characters.

Future generations deserve for us to get this — and moments like this — correct. Because if we don’t, a slightly altered version will become fact. And one day, if — for example — a horse from one of these missing carousels shows up, nobody will understand the treasure they’ve uncovered.