I just went to a play at Southern Rep Theatre, a theater company I highlighted here.  First off — the space is beautiful.  Their new “forever home” is in an old 103-year old church on Bayou Road.  The building is vibrant, but so is the neighborhood: men hanging out outside a barber shop; women hanging out outside a restaurant.  Thoughts of dinner and a show (with drinks after, duh) ran through my head.

But the best part: the play was awesome.  Really awesome.

I don’t want to sound like a snob, but there’s really no way to avoid it here.  I love going to see a show.  Sometimes (maybe too often) with plays, I end up walking out thinking: Well, that was kind of interesting, but also cheesy.  Weird accents.  Unbelievable story lines.  Unlikely character arcs.   It just doesn’t feel real in the way a big budget movie can.

And, listen, I was Aladdin in my 5th grade play, Aladdin…so I know.

But A Doll’s House, Part 2 was so good.  It was original.  It was thought-provoking.  The acting was strong.  And it reminded me that theater can reach the same authenticity that a movie can.

There are a lot of amazing movies out right now and they’re SO worth seeing.  But go see this play first.  Its run ends this Sunday, so you have three more chances to see it.  And,when you do, let me know what you thought. 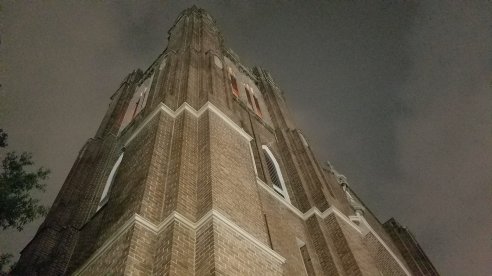 The play is a thoughtful critique of marriage and relationships.  It’s funny, but — with a large percentage of the audience married or aspiring to marriage someday — the laughter is uncomfortable.  We’re all the butt of the joke and the dialogue makes us look inward.

This monologue toward the end resonated with me.  The main character is talking to her ex(ish)-husband(ish) about what she was up to the 15 years after she left him:

So when I saved enough money, I left the boarding house and went and lived up north.  I found what was basically an abandoned shack.

And even though I was living by myself, for everything I did and every decision I made — from what I ate to when I went to bed — I could hear a voice in the back of my head that either sounded like you or my father or the pastor or any number of other people I knew.  I always, in my head, somehow managed to check with that person to see what he thought, even though that person wasn’t a person, but my thinking of that person.

And so, as long as that continued, I’d decided that I’d live in silence — not speaking and avoiding the speaking of others.  And I’d live like this until I couldn’t remember what other people sounded like.  Until I no longer heard a voice in my head other than my voice, or what I was certain had to be my voice.

That took almost two years.  Two years of silence.  And once I could hear my voice, I could think of things that I wanted that had nothing to do with what anyone else wanted.

It’s really hard to hear your own voice, and every lie you tell makes your voice harder to hear, and a lot of what we do is lying.  Especially when what we want so badly from other people is for them to love us.

That’s the lesson I started to learn on the Appalachian Trail, but I haven’t really gotten it yet.  When I mindlessly reach for my phone to scan the news or a dating app, I’m blocking out my voice.  I don’t put in the effort to listen to it, because it’s hard work to find it.

Anyway — I loved the play.  So check it out, and — pro-tip — while they’re still doing renovations on the theater, there’s basically an open bar you can enjoy before and after the show.  (Donations welcome.)  So, there’s a lot to look forward to!