In September I took on a gig teaching an after-school Storytelling class to second graders for an hour or two each weekday as part of the program, Community Works.  I was excited to share my passion for writing with kids, and I was not at all bummed that it happened to pay pretty well!

There was an adjustment period in learning what a second grade brain was ready to absorb (and how it might absorb those things), but now we’re starting to figure it out.  We write, we read, and we spell.  We talk about our opinions on the best things to do on the playground, and create stories about what we did during Fall Break.

I’m slowly getting better at that stuff, but am learning I don’t really love the discipline part.  I learned I can get them to pay attention(ish) if I give lollipops to the students that are behaving.  But now I’m worried all the “good kids” are being rewarded with the long-term gift of cavities.  One of them lost two teeth over Fall Break and I couldn’t help but wonder if I was responsible.

The disruptors, on the other hand, are going to live a happy, toothy lifetime.

Teaching second grade also involves constant attacks on my self-esteem.  “Do you only have four shirts?” one kid asked.

“No, I have five shirts,” I responded.  “Two of them just happen to look exactly the same.”

Another day, on the playground, one girl asked me how old I was.  “How old do you think I am?” I asked back.

“Do you have a girlfriend?” she asked, concerned.

I considered how truthful I should be in my response.  “No, I don’t.”

But some of the kids lift me up!  For example, one boy draws pictures of me every day.  He draws me as strange, usually inanimate objects, sure, but still, it feels like a compliment.

Here I am as a Pop Tart.

And here I am as a watermelon. 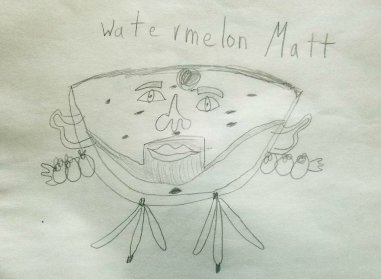 He spoke with pride about the tomato arms and the banana legs.  “Gotta keep your legs peeled,” he made a joke that only half made sense.

“What’s that circle between my eyebrows,” I asked him.  Maybe I had some grease from my bicycle on my head.  Maybe I had a cowlick sticking up or something. 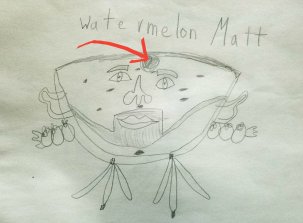 “That’s that piece of hair at the front of your head, Mr. Matt.”

I excused myself to the bathroom to fix my hair.  But there was nothing to fix except *sigh* my self-esteem.  Time to adjust it down another notch.

I gave the artist three lollipops and bided my time.  When he’s 35, I thought, he’ll have no teeth.  And me and my widow’s peak will have the last laugh, then.